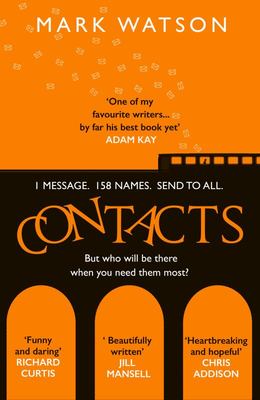 'This is such a great book, funny and serious and daring and humane' Richard Curtis

James Chiltern boards the 23:50 sleeper train from London to Edinburgh with two pork pies, six beers and a packet of chocolate digestives. At 23:55 he sends a message to all 158 people in his contacts, telling them that he plans to end his life in the morning. He then switches his phone to flight mode. He's said goodbye. To him, it's the end of his story - and time to crack open the biscuits.

But across the world, 158 phones are lighting up with a notification. Phones belonging to his mum. His sister. His ex-best friend. The woman who broke his heart. People he's lost touch with. People he barely knows. And for them, the message is only the beginning of the journey.

Funny and wise, tender and deeply moving, Contacts is a beautiful story about the weight of loneliness, the importance of kindness - and how it's never too late to reach out.